“Tad Cornell’s resourceful Imagist poems are often satirical—laced with insights and playfulness—about theology, philosophy, literature, and pop culture. The aperture into his poetry is the delight in writing one’s way through thinking. His sequences are seamlessly fused into one grand book by the variations of a witty voice. . . As readers “drift” through the musing texts, Cornell’s images will be unforgettable.” PRECIS: This volume of Tad Cornell’s work opens with prose apologia, a frank explanation of autobiographical data, literary philosophy, the thematic content of particular segments of Ghostship Dream Sinking, and insight into the global history manifested from a chicken farm on the high desert of Nevada.

PERSIAN MINIATURES: If giant Peruvian geoglyphs, seen only from the air, were the roads of petition littered in broken pottery shards, this one poem would hope to reconstruct the tiny foibles of local famine.

BELONGS (Coming Soon to a Theater Near You): “An example of modern struggle-yearning” aptly summarizes the theme, in the first line of this ostensible documentary on the making of a film, which our filmmaker understands is—to be heard, to belong to in the book about Place. Were you late for his lecture? Maybe. But not too late for the story.

GHOSTSHIP DREAM SINKING: Thirty-nine poems in all, divided into three parts. Note how God holds up three fingers on this book’s cover in Ryder’s apocalyptic painting of Jonah. New life in Nevada’s desert is complicated by varieties of pestilence heaving the stunning, sublime horizon.

HIERATIC SPEECH: “To find the country where thought springs” is the more sedate quest of these post-Ghostship poems, steeped in natural law via all things elemental and striving to speak each creature’s language as given.

SONNETIC TRIPTYCH: The very first line of the first poem in this book is “chock full of surprise endings even before mundanity grabs that last chance to smother us. . .” The book ends with one poem, a Medieval triptych altarpiece of three sonnets featuring Frankenstein, a mad scientist, and God’s own mother. Surprise! 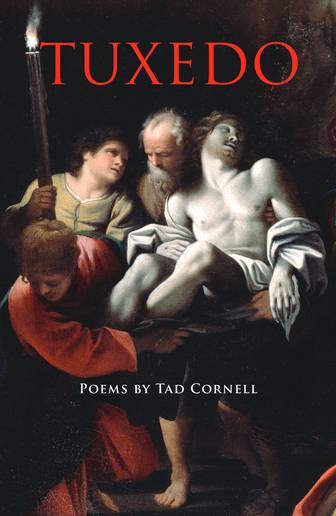 TUXEDO ​(2018) A modern resurgence of Romanticism, a new appropriation of the simple mission of uniting heart and mind . . . *

THE TUXEDO POEMS
Twenty-seven sequential poems are submitted as evidence of a new Romanticism in poetry. The narrative involves a confrontation with somnambulant twilights consistent with post-trauma rehabilitation. The promise of an alleged “future grand tuxedo” is haunted by empty suits.

THE FIVE STEPS OF THE ASTRAL MUMMY
Five stepchildren, their names numbered like cadaver toe tags, a star-crossed brood of brats secured in history, given the cloud of witnesses to a grand genre of posttraumatic stress encounters.

ROCK ’N RODEO
Summing up this five-poem series is the impulse for a simple ballad to praise a gal that is diverted into calming the herd. Cattle-drive “rough” meets the decorative mania of a cubist.

NOTES on the TUXEDO Collection
For inquiring minds, Cornell offers detailed and candid prose commentary on each of the five poem cycles in this volume. He suggests, “Think of it as an art appreciation class by a visiting artist.”

*Cover painting by Sisto Badalocchio "Christ Carried to the Tomb." 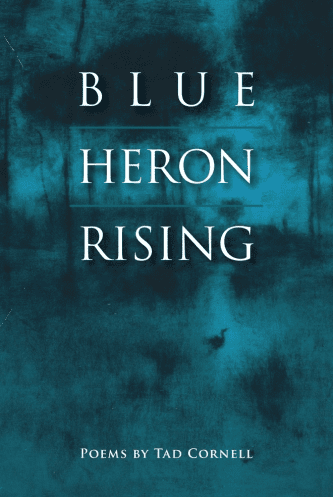 BLUE HERON RISING   (2015) spans work written between 1985 and 2005. Two separate collections of individual incidental poems are distinguished by candor and wonder; the rest are long segmented poems or poem sequences that accumulate, each telling a story. The spirit that unites these chapters is the theme of being haunted by an elusive memory of past glory and shame and the will to lift one’s Neolithic soul from Butcher Bean Creek and lyrically take wing.*

*Cover painting by George Inness "The Home of the Heron" 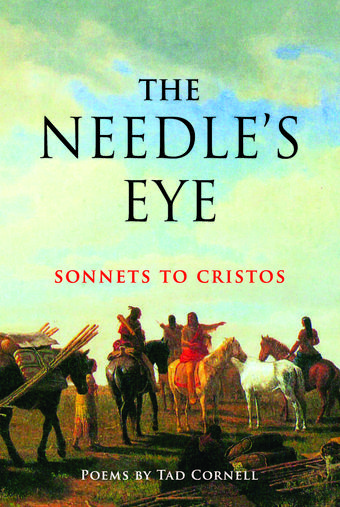 THE NEEDLE'S EYE: SONNETS TO CRISTOS (2016) is a volume of 109 sonnets threading together a menagerie of themes—from Native American legends, early US history, and classic Hollywood films to contemporary disasters and human delinquency. Tempted to provide a warning label, the author instead offers unapologetic insights like found objects that ultimately point to a longing for an abiding home.

"Tad Cornell's beautifully crafted and sonorous poems create high formal music that explores mysteries, sacred and secular. He is a Catholic poet of substance and originality." ​IN WHOM IS MY DELIGHT (2015) is a collection of five chapbooks written between 2007 and 2015 by underground poet and sometimes performer Tad Cornell (T. H. Cornell).*

These modern sagas exalt reality and exult in the unity of goodness, truth, and beauty. Combining a Catholic sensibility, in the spirit of G. K. Chesterton, with a contemporary idiom, this narrative adventure celebrates the mystery of Christ and the glory of the English language.

LISTEN to a TAD CORNELL READING
April 23, 2014, from IN WHOM IS MY DELIGHT

The presentation was given at the International Institute for Culture in Philadelphia, PA, upon the occasion of his retirement from a 30-year career in social work. His developmentally disabled clients and friends were invited to the event and included in the feedback portion of the program. This was also a celebration of Shakespeare's birthday (and death day) with a commentary on the theory that Shakespeare was a secret Catholic during a period of persecution of Roman Catholics by Queen Elizabeth. The presentation is rounded off with Cornell completing the reading of his poem "Spectaculum" from his book IN WHOM IS MY DELIGHT, which narrates how the poem's persona experiences, in time travel, the hidden life of Christ's childhood in rural Nazareth. The recording is in 3 parts.
Click here ​Reading